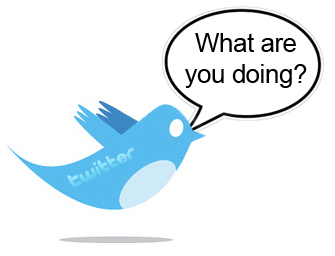 I knew that Todd Carpenter’s guest post was going to open a can of worms for me.  I spent a good part of yesterday fielding questions about “this Twitter”.  I know I’m not the first to bring an explanation to the interweb, but it’s going to save me from having to do it again.

Do you remember when you first grasped the idea of texting on your cell phone?

I remember thinking, “Who on Earth would waste their time doing such a thing?”
Now, texting has become such a part of my daily communications that I send and receive several hundreds of texts a month.

Initially, Twitter struck me exactly the same way.  However, now it is starting to become an integral part of the way that I ‘feel’ connected to my online network.

One of the reasons why a non-Twitterer may still not see the value and allure of Tweeting is because they can’t see the need.

Short messages, describing what you are up to at the moment, published online, for the odd folk that care.
“Sitting in row KK, seat 32 at the A’s vs Red Sox game.”
“Just finished dinner at the Waffle House, here’s a pic”
“Why am I still up?”
“At Starbucks by the Palace, join us!”
“just accidentally dropped my Treo in the toilet”

Some of the above are real and some are feigned, but you can’t tell which is which… which is the point.  Anything goes with a Twitter update – a Tweet if you will.

One of the reasons why a non-Twitterer may still not see the value and allure of Tweeting is because they can’t see the need.

Just as I couldn’t see the need to text, when I had a perfectly fine communication device in my hand called the phone.  Why take the time to type out a less than descriptive message to someone when I could just as easily ring them up for a chat?
If I wanted to type something to somebody, well, why not just send an email?

Twitter is not unlike the text message, but rather than use it to communicate to an individual or a specific group, it is a broadcast of your current state, to anyone who cares.

Twitter asks you, “What are you doing?”
You type in a message no longer than 140 characters.
Fortunately, the message can include links, which help you expand your message by sending the reader to a website, image, podcast, blog article, etc.
Click “update” and the message is now broadcast for all those that care.

I don’t know… who cares that I blog?  Who cares that I answer the phone when they call?
Once you have made yourself known to be a Tweeter, the community that could, would or should care, does care.
The fastest way to develop a community that cares about ‘what you are doing’ is to subscribe to their profile, in order to follow broadcasts of what they are doing.

You still might be scratching your head wondering, “Why the heck would I want to do that?”

For many, an online network has positioned itself as an important and integral part of their social and business worlds.  Online life has grown beyond the email database.  People are seeking and making real connections online, with the like-minded.  The online landscape has inevitably become their business and social playing field.

The whimsical connection, water-cooler chatter, small talk, the first question you hear on the phone… these are examples of the role that Twitter satisfies for your online network.  It is your online connection to those that care about the little events that are happening in your life, as much as it is your connection to follow the stream of events that happen in the lives of those you care about as well.  It is these personal connections that are tightening while expanding the network around you. 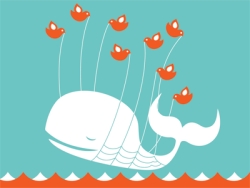 1. Follow First to get the feel of the effort.
2. Learn the tricks:
TinyURL’s for shortened web addresses making it possible to fit a link in the 140 character limit.
TwitPic or the like for posting images from your phone
http://search.twitter.com to dig up Tweets on topics that interest you.
Responding and Direct Messaging with @sender so that they know you care even if they aren’t following you (yet).
3. Get your Real World friends and business contacts into it as well.
4. Remember, you are publishing to the internet, and if you wouldn’t say it to a crowded room, it might be best to resist.
5. Learn to Tweet by Text (40404) or with a Twitter application for your fancy iPhone.
6. Seek out some big names that Tweet.  You’d be surprised who takes the time to broadcast what they are doing.
7. Follow me: https://twitter.com/retomato

A small sampling of Twittering addicts that I follow from the RE.net:

Should I Tweet my listings? Open houses? Buyer Needs?
My take – if you have found a way to build an audience that cares, then sure.
If not, then you are not being as constructive as you may hope.
Should I tweet my Blog articles?
Of course, but don’t pigeon-hole your efforts as a marketing platform for your blog.
Should I tweet to self advertise?
If you are thinking this way, then you have definitely missed the point… put the business card away, pal.
How will Twitter help my Real Estate Business?
As you continue to leverage the internet at a place where you network, Twitter facilitates your personal connection to those that care about you and your day.  In real estate, one never knows from where their next lead relationship will develop.  Twitter is all about the incubation of these online connections you have made as you find your place in the social web.